Even with the proliferation of online tools, SaaS software providers, and free Google apps, I constantly see teams that attempt to manage projects via email.  When joining a team or project midstream, below are some of the questions that I often ask:

Are you able to answer these questions from email alone?  The answer is maybe – but it will take a long time to sift through your emails and arrive at the appropriate answer.

Why not track this information in a system and manage these types of statistics daily via a dashboard?  Oh – and by the way – if you setup your tracking system in the right way, it can become intelligent.  You’re probably wondering what I mean by that statement.  Well, let’s look at an example:

This is a very basic example, but this is what I mean by having an “intelligent” system.  Your system should be designed not only to capture the right pieces of data for your project, but also the associated workflow.  Many systems have email notification and basic reporting functions built-in as well.  Throughout my career, I have used many systems to manage a process through technology.  Depending on your budget and how quickly you need the environment available, you may prefer different vendors.  Here are a few of my favorites with a bit of my personal analysis:

If you are looking for a recommended tool, I will provide the following analysis based upon my own experience.  You should always carefully consider your requirements and procure the right tool for your organization. 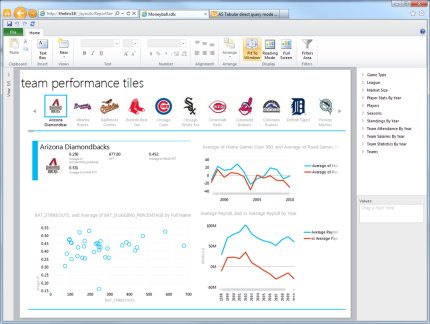 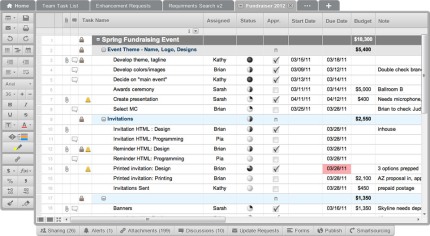 Recently, I received an email as part of a listserv from a colleague at HEDW.org.  HEDW, or Higher Education Data Warehousing Forum, is a network of higher education colleagues dedicated to promoting the sharing of knowledge and best practices regarding knowledge management in colleges and universities, including building data warehouses, developing institutional reporting strategies, and providing decision support.

In the email that I referenced above, my colleague sent a link to an IBM Redbooks publication titled, “Dimensional Modeling: In a Business Intelligence Environment.”  This is a good read for someone that wants the basics of data warehousing.  It also may be a good refresher for others.  Here’s a short description of the book:

In this IBM Redbooks publication we describe and demonstrate dimensional data modeling techniques and technology, specifically focused on business intelligence and data warehousing. It is to help the reader understand how to design, maintain, and use a dimensional model for data warehousing that can provide the data access and performance required for business intelligence.

Business intelligence is comprised of a data warehousing infrastructure, and a query, analysis, and reporting environment. Here we focus on the data warehousing infrastructure. But only a specific element of it, the data model – which we consider the base building block of the data warehouse. Or, more precisely, the topic of data modeling and its impact on the business and business applications. The objective is not to provide a treatise on dimensional modeling techniques, but to focus at a more practical level.

In reading through a few responses on the listserv, it compelled me to produce a list of some of my favorite BI books.  I’ll publish a part II to this post in the future, but here is an initial list that I would recommend to any BI professional.  It is also worth signing up for the Kimball Group’s Design Tips.  They are tremendously useful.

I just read a great article by Bob Becker at the Kimball Group.  It addresses some of the key issues of scope creep in BI projects.  I find the Kimball Group a great resource for anyone implementing or maintaining a BI system.

Data quality is always an aspect of business intelligence (BI) projects that seems to be deprioritized.  It is easy to look at the beautiful visualizations and drill-through reports that are key selling features of a BI project.  However, this article is about the value of cleansing your data so that these tools will work seamlessly with the data model that you establish.  Everyone knows the IT saying, “Garbage in.  Garbage Out.”  That holds entirely true with BI projects.  If the incoming data is dirty, it is going to be very difficult to efficiently process the data and make it available for a reporting platform.  This isn’t an easy problem to solve either.  When working across multiple functional areas, you may also have different sets of users that are entering data into the system in DIFFERENT ways.  So, in this instance, you may not have a data quality issue, but a business process issue.

As I have worked through my BI projects, here are 10 steps that I have followed to work with teams to create a data-centric culture and to improve data integrity.   I hope that these are of use to you…and please feel free to share any additional best practice in the comments of this blog!  We can all learn from one another.

Recently, I read a very informative white paper which was published by TDWI’s Philip Russom.  The research in this report was sponsored by some of the key BI players below – so it had significant backing.

I wanted to share the top 10 myths about Hadoop from TDWI’s report.  I found them insightful and you may as well:

Philip also did a nice job in this white paper in clarifying the status of current HDFS implementations.  It is represented well in the graphic below.

To sort out which Hadoop products are in use today (and will be in the near future), this report’s
survey asked: Which of the following Hadoop and related technologies are in production in your
organization today? Which will go into production within three years? These
questions were answered by a subset of 48 survey respondents who claim they’ve deployed or used
HDFS. Hence, their responses are quite credible, being based on direct, hands-on experience.

HDFS and a few add-ons are the most commonly used Hadoop products today.  HDFS is near the top of
the list (67%) because most Hadoop-based applications demand HDFS as the base
platform. Certain add-on Hadoop tools are regularly layered atop HDFS today:

If this information has been helpful to you, check out the full report from TDWI below.  How is your organization using Hadoop?

In numerous engagements, and working both in the position of the client and the consultant, I have been continually asked about the value of project management.  I often hear questions like this:

Let’s start to address these questions by reviewing a few of the statistics provided by a PMSolutions report titled, “The State of the PMO 2010“.  This study found the following value benchmarks:

Another study was completed in 2007 by PricewaterhouseCoopers, titled, “Insights and Trends: Current Program and Project Management Practices.”  This study found the following:

Outside of these facts, I have personally found project management to be of extreme value on technical projects.  You commonly hear the value proposition explained as:

For technical projects, project managers become even more valuable.  They generally grow within an organization into a project management role.  This infuses a lot of great technical knowledge into the project and can help tremendously to ensure that the right architecture is being put in place and the minimal rework is being done.  This equates to cost savings and efficiency.

If you are considering the proposition of hiring a vendor project manager, the vendor project manager will not only have this technical knowledge, but they will also be invaluable when securing vendor resources for the project and managing through their own organization.  Many BI organizations are a combination of M&As that have taken place.  You will need help in navigating their corporate structure and avoiding pitfalls in their technology!

I’ll leave you with what I felt was a good representation of the project management process.  My question to the skeptics is:  why wouldn’t you want this structure and value as an integral part of your project?  I would.

With the release of Microsoft SQL Server 2012, Microsoft has bought into the concept of column-store indexes with its VertiPaq technology.  This is similar to the approach taken by Vertica.  In a very simplistic example, below is a standard data set:

In a common row-store, this might be stored on the disk as follows:

Column-store indexes store each column’s data together.  In a column-store, you may find the information stored on the disk in this format:

The important thing to notice is that the columns are stored individually.  If your queries are just doing SELECT LastName, FirstName then you don’t need to read the business unit or job title.  Effectively, you read less off the disk.  This is fantastic for data warehouses where query performance is paramount.   In their white paper, Microsoft uses the illustration below to better explain how columnstore indexes work: 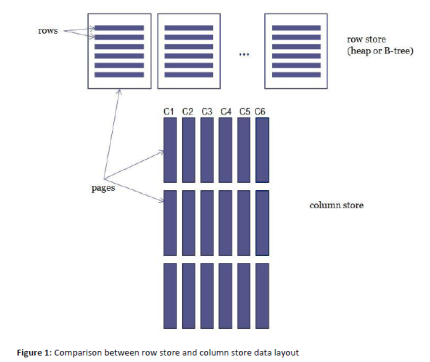 The benefits of using a non-clustered columnstore index are:

Microsoft recommends that columnstore indexes are used for fact tables in datawarehouses, for large dimensions (say with more than 10 millions of records), and any large tables designated to be used as read-only.  When introducing a columnstore index, tables do become read only.  Some may see this as a disadvantage.  To learn more about Microsoft’s columnstore indexes, read their article titled, “Columstore Indexes Described.”

So let’s take a quick look at how to do this in the 2012 SQL Server Management Studio.  If you need to add a new non-clustered column store index, you can do so as seen below:

To ensure that the non-clustered columnstore index is achieving the right result for you, test it.  Under the Query menu, ensure that you enable the “Display Estimated Execution Plan.” 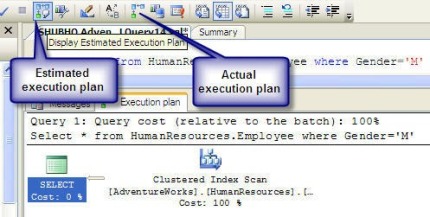 You should now be in a position to analyze your old and new queries to determine which is optimal from a performance perspective.  You’ll likely see a great reduction in query time by using the non-clustered columnstore index.

What are your thoughts?  Are you using columnstore indexes in your environment?